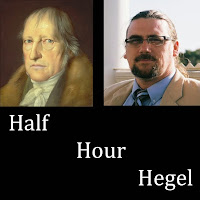 It was a good thing that I did that.  The page was about ten or so lectures behind.  The videos on the Duplicity and Deception section were long ago finished, so all of those are now linked to on that page.  And the four videos available so far in the Conscience section are now there as well.

Once we finish up the Conscience section, we will have successfully made it to the end of the massive Spirit portion of the work, and we'll be starting Religion - the second to last portion of the work.  I expect that between what's left of Spirit, that Religion portion and the last, short portion - Absolute Knowing - I'll likely need to shoot somewhere between 60 to 80 additional half-hour videos, bringing the series to well over 300.
Posted by Gregory B. Sadler at 2:20 PM

Support The Series on Patreon

Become a Patron!
The Half-Hour videos, talks, and online sessions are produced and provided as a public good, made possible by the generosity of Patreon supporters.